This website or its third-party tools use cookies which are necessary to its functioning and required to improve your experience. By clicking the consent button, you agree to allow the site to use, collect and/or store cookies.
I accept

You are here: Home / Podcast Episodes / Quick Tip: Bring the charm into your marketing communications 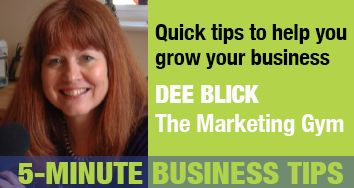 Our Quick Tips are designed to help you build your business skills, a few minutes at a time. If you want to know more about the same subject – and have more time to spare – you can listen to the 15-minute masterclass on the same topic.

In this quick 5-minute tip, Dee Blick, marketing expert, bestselling author and owner of marketing company, The Marketing Gym, talks about the value of charm in your marketing communications. Listen now:

Hi there, it’s Dee again, talking about charm. Don’t you just love it when you meet someone who oozes charm or you receive a letter. The person wants your business, but the letter is so charming that you can’t help but either pick up the phone, return the voucher, go on to their website. You’re almost propelled there, aren’t you? By the same token, don’t you just hate it when you either receive a charmless communication or you meet somebody who really needs to be sent back to the Charm Academy to redo their examinations, because they’ve failed spectacularly?

What I’d like to do is talk a little bit about the importance of charm in all of our communications, both written and verbal and, as usual, we’re going to look at two businesses, the ‘bad’ business, ie the charmless business, and the fabulous business, that oozes charm.

The ‘bad’ business: the business that is struggling in its efforts

Let’s look at that ‘bad’ business. What is so wrong with them? Why are they charmless? They’re the kind of business owner that when they send an email to a potential client, it may be following up on that telephone conversation that was pretty charming, but now they’re in a bit of a rush. That email is almost perfunctory: “Dear Dee, great to meet you. Here’s my price for the services you’re interested in. Let me know if you’re interested.”

Then you get that email and you think, ‘Blimey, is that all I was worth? Have they really done that?’ Or, worse still, they haven’t spell checked the email, so the apostrophes are in the wrong places, there’s lower-case when there should be upper-case, fairly basic stuff, but you know what? I work with so many businesses, appraising their written communications and I’ll tell you something. Every single salesman falls into this bad business category. Their follow-up emails are horrendous.

Going back to that ‘bad’ business again, they might rant a bit of Twitter. They might think, “Oh, this is quite funny. I’ll put a joke on there that’s improper. I’ll swear on there.” They’re not really thinking that, “Well, actually I’m Tweeting in my business name, here. What impression am I creating of me and my brand?” Again, the bad business might be prone to over-exaggeration: “We are simply the best business in the world.” They’re treating the people that are reading their communications like they’re idiots, like they don’t know there are, in fact, better businesses to be doing business with.

The charmless business has got a lot to learn, because their sales communications are in effect, an extension of their brand of what they stand for and they’ve forgotten that. They’ve absolutely forgotten that when they’re out of the picture, there’s something else. There’s a pattern that’s being carried on, which is that sales letter that’s blunt and abrupt or that flier that’s full of spelling mistakes or it just looks tatty. They’ve forgotten about the impact they’re creating. They’ve forgotten that a big of good, old-fashioned charm can really ‘butter up’ that relationship.

The ‘good’ business: the business that is working towards success

Let’s now look at the ‘good’ business, that’s absolutely oozing charm. What is it that that good business is doing to ooze so much charm? They’re doing the basics brilliantly. They’re not having to be gurus at marketing or experts. They’re brilliant at the basics, which are their emails … They’ve spent a little bit of time crafting, not just writing, crafting those emails in much the same way that you bake that cake. If you’re taking that cake to the village fair, it won’t look fairly tatty with no icing on top or the icing’s dribbling all over and patchy in areas. They’re looking upon it as a bit of a craft. Let’s get a really nice email.

When they’re writing their sales letters, they’re explaining, “I’m a new business. I’d love to introduce my products and services to you. So, I’ll tell you a little bit more about it in this letter, but I’d really like to meet with you”, rather than just, “Dear so and so, I’ve started my business. You should be buying from me. Here’s a list of what I do.” They’re really spending time crafting those messages. That good business that’s charming, they’ve got a bit of humility. They know what their short-fallings are, what [inaudible 00:04:10], if you like their deficits are, but they also know what makes them so good.

They’re the kind of people that at a networking event, you love being around them. Why? Because, they’re listening to people. They’re really listening. They’re asking questions. They’re being passionate about their business and when you receive an email from them, it’s not a blank email that went to everybody. It’s a nice little personal email that’s sent to you, that reflects your conversation. What they’re doing is, they’re going the extra mile, all the time. They’re thinking about everything that they do, as a communication of their brand and their values and what they stand for. That really is about being charming.

I can remember as a young woman, being taught the importance of charm by one of the world’s greatest copy-writing gurus, Drayton Byrd, and he told me about, “Whatever message I created, make sure it’s charming. Don’t try and dupe the customer. Don’t promise to be what you’re not. Just carry a really simple, beautiful message that you spent a long time over, that’s relevant, that shows you understand the needs of the people that you are communicating with,” so I really hope that’s given you a sense of how you can be absolutely and effortlessly charming, too, and the best bit is, it won’t cost you a penny.

TAKE A LOOK AROUND

For over ten years, Essential Business has produced books, workbooks and training courses to help other business owners, advisors and educators with the practicalities and realities of running a business.